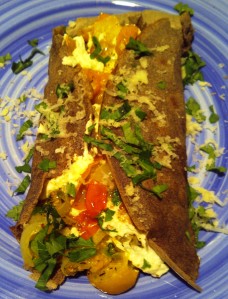 I love most things French, but I have always been much more of an italophile than a francophile. One of the reasons for that is that I find the Italian light-hearted, happy-go-lucky attitude to be very attractive. Same thing goes for cooking: many classic French recipes are not very forgiving, and require strict adherence to the measurement and process. So, whenever I attempt French dishes, I still avoid blindly following a recipe, and try to understand it and make it my own (so that I could deviate from it to suit my fancy). I think of it as applying the Italian attitude to French cooking. For me, cooking is fun, and I don’t want to take it too seriously.

Consistent with my theory of savory food supremacy, I have a serious weakness for savory buckwheat crepes, known in France as galette. They hail from the Northwest of France; more specifically, from Brittany. All-in-all, the batter is not difficult and Bretons themselves don’t use a recipe. Typically, the night before they simply mix buckwheat flour, sea salt, and water to make a paste. The next day, they thin it out until it reaches the consistency of melted ice-cream. As you can see, the true galette is pretty minimalist, and frankly, I feel intimidated by such a simple recipe (because as we know, simpler is more difficult). I perused a bunch of very different recipes (as the version from Normandy is quite a bit richer, and includes eggs, cream, and milk), and trusted my intuition to arrive at the following:

1 cup of buckwheat flour (Arrowhead Mills organic), 1 cup of water, 1 egg, 1 tbs olive oil, and 1 tbs French sea salt. To prepare the batter, you combine the flour and the salt in a large bowl, make a little well in the middle, and put in the oil and the whole egg. Stir the mixture with a wooden spoon to incorporate the wet stuff, and slowly start adding the water. Keep stirring, till the batter is smooth and homogenous, without lumps.  Let it stand for at least an hour. In the meantime, get your fillings ready:

To make galettes, I used a basic non-stick pan. Pour a small ladle-worth into a hot pan primed with a tiny bit of butter, and swirl the batter to distribute it evenly. Cook till light golden brown, flip the galette, and spread the filling on top. Once the other side is cooked, and the filling is nice and melted, slide the crepe onto a plate. Fold it in half, and serve it immediately. It yields about 6 crepes (of course, don’t forget that the first one’s a dud, so plan accordingly). I find it to be an appropriate amount for two people. 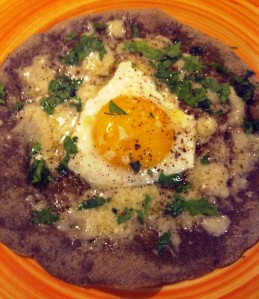 To get a good feel for making galettes,I subjected my poor husband to two meals of buckwheat crepes this weekend (albeit with different fillings). I made our galettes with: 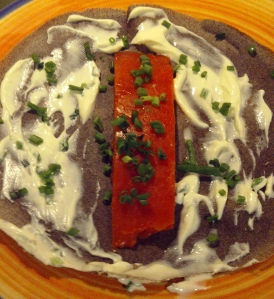 – and the most dangerous of them all: lightly smeared with burnt caramel sauce from Recchiuti. (I apologize in advance for introducing everyone to this product :-)).

Galettes are traditionally paired with artisanal French ciders, and so I picked up a couple from Whole Foods for our latest experiment (Etienne Dupont Cidre Triple 2010, and Etienne Dupont Cidre  Bouché Brut de Normandie Bio 2010 (biodynamic, unpasteurized, and unfiltered cider). The latter, a crisp, earthy and funky cider, turned out to be an absolutely amazing accompaniment to all the savory galettes; I simply cannot imagine anything better. The fuller-bodied Triple, with a big nose of both tart green and caramelized apples, was better on its own, and was also a winner with the caramel sauce galette.

As a result, we spent the rest of the afternoon singing French children’s songs such as J’aime la Galette (I Love the Galette), Sur le Pont d’Avignon (On the Avignon Bridge), and the original version of the chicken dance called the Ducks Dance in France and most of Europe (La Danse des Canards). If you are unfamiliar with those, you can easily find them on YouTube sung by puppets, kittens, and penguins.

See, French cuisine does not have to be serious…