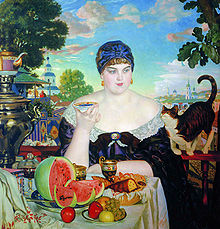 Russia Day (June 12) is not a holiday I grew up with, as my entire childhood was spent in Soviet Russia. It has been celebrated only since 1991, following the breakup of the Soviet Union, and Russia’s newly found independence (although it is hard to define from whom, exactly). At any rate, this holiday presents a perfect excuse to celebrate being a snooty Moscow girl :-).

This year I was fortunate enough to receive an invitation to the reception at the Russian Embassy in Washington DC hosted by the Russian Ambassador and his entourage.

The focal point of the evening was Russian food. The spread was lavish and exquisite; it lacked the grotesque excesses of the pre-revolutionary aristocracy, and of the “new Russians” (as in, large tubs of caviar and champagne fountains). The event as a whole was in amazingly good taste, and it was marked by the conspicuous absence of scantily dressed leggy 20-year old Russian babes. Instead, it was full of classy and beautiful women who have managed to escape the curse of premature aging so common in Russia. (The unintended consequence of looking young is that some Russian women currently living in the U.S. still get stern looks from the cashier and demands to see some ID when buying alcohol at a grocery store :-))

The spirit was clearly celebratory. Delicacies abounded, – caviar, sturgeon, tongue, roasted piglet, you name it. They were served side by side with homey but amazing meat pies (“pierozhki”), shish kebabs (“shashlik”), dumplings (“pelmeni”), eggplant rolls, a shrimp-laden version of “Olivier” a.k.a. “Russian” salad…the list goes on almost indefinitely. 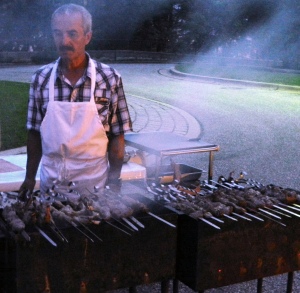 Libations were as plentiful and potent as the Volga river, the traditional drink of choice being pure, unadulterated liquor (no mixers, no ice cubes). Those of you who have read “The Master and Margarita” may even recall Behemoth’s immortal line, “Do you think I would offer vodka to a lady? This is pure grain alcohol!”

Joking aside, we did toast with Rossijskaja vodka, – smooth as a baby’s bottom, with all the traditional chasers (caviar, smoked salmon, pickled mushrooms and cabbage, tongue with horseradish, herring, hot-smoked sturgeon, etc. The other “choices of a new generation” were whiskey and gin; this was no place for molecular mixology.

Thank God, there was no “Soviet Champagne” (“Sovietskoje Shampanskoje”), ubiquitous at every Russian gathering back in the day. Essentially an alcoholic grape soda pop, it bore as much resemblance to the real stuff as American pumpernickel bread to the Russian “black” rye bread . A “Soviet” sparkler would not be appropriate for the occasion, anyway.

After the party we did not feel the need to check off any additional boxes, and decided to skip the original plan of tasting blini, caviar, and premium vodkas at the nearby Russia House lounge and restaurant. It has one of those inviting façades marred by Russian bandit  bouncer types, sporting the mandatory bad haircuts, jogging suits, and gold chains. Instead, we just slowly walked home…

This holiday made me think of one of my favorite childhood treats: spoonfuls of homemade dulce de leche (soft caramel), made by boiling an unopened can of condensed sweetened milk for several hours (“var’onaja sgushenka”): 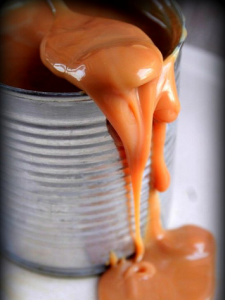 If I weren’t lazy (of course that would be starting with a counterfactual :-)), I would make something ambitious like a traditional cake called “The Count’s Castle Ruins” (“Grafskije Razvalini”), in order to celebrate the occasion. It is one big delicious mess featuring layered soft caramel, merengue, nuts, etc. that perfectly illustrates the aftermath of many political events of the past.